This paper takes enclosure and commodification processes of “nature” one step beyond a political economy perspective conceptualising them from ontological notions of nature-culture relations. Taking the case of enclosure for large-scale commercial agriculture schemes and a game reserve in northeastern Ethiopia, the paper argues that enclosure and nature commodification are part of neoliberal environmental governance that has been built on the notion of subduing nature and subaltern groups into the power of capitalism. More specifically, while the economic and political dimensions of these processes are salient, the ontological notions of the natureculture dualism has been invoked by states in their justification of expropriating pastoralist lands, thus nullifying indigenous people’s claim to ancestral homelands. The data for this paper was collected from 2013 to 2016 through ethnographic fieldwork, mainly conducted by the authors. The findings show oscillating perceptions of humane-environment relations among the Afar pastoralists: from human-environment, conjointly constituted by humans and non-humans, to the utilitarian dualist approach of environmental use which is mainly caused by the infiltration of capitalist economy and state driven development and conservation projects.

Most read articles by the same author(s) 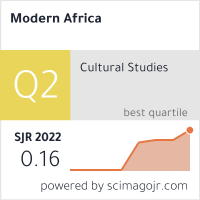